Restoration Work Continues at The Lofts at 7714 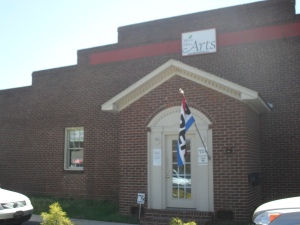 The exterior of The Lofts at 7714 continues to get a facelift.  Although this circa 1945 mill building has aged quite gracefully, as we all know a little, sometimes you need a little work done to look your best.

After cleaning the framed masonry at the top of the building (new photo coming soon), all of the trim on the front was scraped, cleaned and painted in a creamy white color to help the lovely aged brick stand out.

With just four commercial spaces still available in this is up-and-coming building in downtown Mint Hill, the time to locate your business (retail, studio or office) into The Lofts at 7714 is now.

The Lofts at 7714 – Affordable Prices for Local Merchants, Entrepreneurs and Creative Souls.

Posted in In the News

As the owners of The Lofts at 7714, we are committed to learning more about the building’s initial origins.  Not only have we uncovered the faint etching of “King Craft Hosiery Mills” now that we’ve returned the masonry at the top of the building to its original state but we’ve also uncovered the local news coverage of the mill’s introduction to the public.

In a 1945 summer edition of The Charlotte News, a former daily newspaper out of Charlotte, North Carolina, Mint Hill took it’s place alongside Charlotte, Belmont, McAdenville and other Mecklenburg County communities as home to one of the region’s textile mills, thus providing employment at the time for up to 40 people in Mint Hill.

The King Craft Hosiery Mills will establish a plant at Mint Hill next month and expects to get into operation by Sept. 1.

This was announced today by Mrs. Herman S. Dersch, a partner in the firm.

A lease agreement on file at the Courthouse disclosed that Carl J. McEwen, Charlotte and Mint Hill undertaker and business man, had agreed to construct a building to house the concern and to have it ready by Aug. 15.

The King Craft concern, it was explained, is a partnership composed of Herman S. Dersch of Jackson Ave., Charlotte, Ellen B. Dersch and Ellen R. Caywood.  On last April 30 it purchased the Kingston Hosiery Mill on 118 E. Kingston Ave. here and will use this equipment until newer machinery becomes available.

Mrs. Dersch said the building, to be of cement block construction with brick facing, would be 65 by 112 feet in dimensions and would provide ample space for twelve machines.  The lease agreement filed at the Courthouse stipulated that the building should be on a lot 125 by 250 feet.

Mrs. Dersch said that at present 45-gauge machines would be used but that orders had been placed for 51-gauge ones and these would be installed as soon as they become available.

Approximately 40 employees will be used at the start, Mrs. Dersch said.

We plan to start moving in about Aug 15, Mrs. Dersch said.

The lease, filed in the office at the Register of Deeds John R. Renfrow, set forth that the cost of construction plus 6 per cent plus $450 should be taken as the value of the property in fixing the rental and option to purchase.

The lease was for five years at an annual rental of ten per cent of the property’s value.

Mrs. Dersch said she understood Mr. McEwen planned a housing project for possible use by employees of the mill as soon as materials could be obtained.

Mr. McEwen was out of the City and could not be reached for a further statement on this.

The Lofts at 7714’s Past Uncovered with a Little Help

If you happened to be driving through downtown Mint Hill yesterday along Matthews-Mint Hill Road, you probably noticed some unusual work going on at The Lofts at 7714.  There was a truck, ladder and hose all aimed at the front exterior in hopes of uncovering something of the building’s past.

We know that the building was originally constructed to house a hosiery mill and we were hoping to find evidence of that in the way of a sign or engraving within the original masonry in the center top front of the building, something akin to what you see at Nebel Mills in Dilworth/Southend in Charlotte.

This brick framed out section had been painted over many times.  Until yesterday it was a brick red.  But then with the help of a sand blasting crew, the past started to come into soft relief.  Restored to its original state, the masonry reveals the faint etching of letters originally painted or affixed to the building spelling out “King Craft Hosiery.”

These letters are evidence that Mint Hill, for a time, capitalized on the textile boom that helped develop Charlotte and it’s surrounding communities.  And that original mill building is still standing strong as a piece of Mint Hill’s history just as the Charlotte Cotton Mill, Atherton Mill, Alpha Mill and, of course, Nebel Mill do in Charlotte.

The Lofts at 7714 – Affordable Prices for Local Merchants, Entrepreneurs and Creative Souls.

Five Reasons to (Re)Locate Your Business in Mint Hill

Thinking of relocating your business?  Need to downsize your space to free up some cash?  Want to take your home business to the next step with a location of its own?  Whatever the reason, consider Mint Hill for your next  business locale.

Jane Yates Art Moves into The Lofts at 7714

MINT HILL, NC, January 10, 2012 – Jane Yates, a professional artist specializing in oil paintings, portraits and photographs, has moved her art studio into a 250 square foot space in The Lofts at 7714 in downtown Mint Hill.

A native of Virginia Beach, Virginia, Jane grew up on the Chesapeake Bay.  This close proximity to the Atlantic Ocean and the marshes along the Bay engendered an early love of nature that inspires much of the artist’s present work.  Jane’s keen eye for composition, light variance and texture is visible in her nature-inspired works as well as her abstract oil paintings.

Jane will use her new studio space to continue to create her original pieces, along with fellow artist Candace Bridge.

Jane’s 250 square foot studio space is one of ten, unique commercial spaces located within the recently renamed building located at 7714 Matthews-Mint Hill Road.  Four spaces, varying in size from 375 to 3,600 square feet, are currently available for office, retail or studio rental in The Lofts at 7714.

For more information about Jane Yates Art, contact the artist at JaneYates100@yahoo.com or visit her website at www.JaneYates.com.

The Matthews-Mint Hill Weekly picked up above press release about Jane Yates in its January 20th edition.

Posted in Commercial Real Estate Mint Hill, NC, In the News, Tenants of The Lofts at 7714